When I went for our opening orientation meeting my freshman year of college, I met a girl named Katherine. I immediately loved her sweet spirit, her type A personality, her affinity for fun, and I decided that “Kat” and I were going to hit it off great. We lived on the same hall that first year, and quickly became dear friends. Almost every happy memory I have from my time at Meredith College was shared with this amazing girl. She and I live about 2.5 hours apart now and don’t get to see each other much. But no matter how much time passes in between, we pick up right where we left off. She is one of the truest friends I’ve ever known, and one of the most determined.

Today I’m sharing her Success story with you.

Kat’s story is a bit different than some that we have shared here: She didn’t have a whole lot of weight to lose, but wanted to feel better, get back to her pre-baby size, and to get control of her health back!

I hope that it inspires and motivates you as much as it has me! 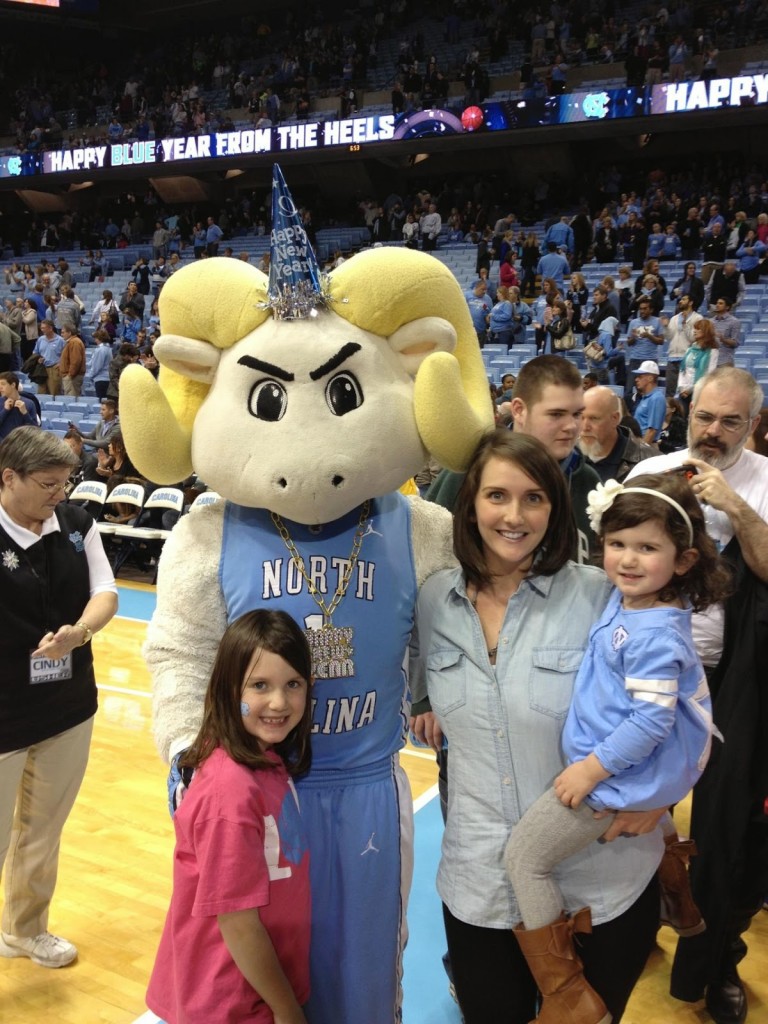 It started during
Halloween 2013, when I easily ate 10 pieces of my kid’s candy a day!  I
would normally have 2-3 with my breakfast, 2-3 when I got home from work and
was starving, and then 4-5 while watching tv at night.  Then came the
holidays: Cookies, cupcakes, etc.
I remember the week
before Christmas we didn’t have anything for breakfast.  So I would eat
five cookies and have a glass of milk for breakfast.  I Probably did this
for 4-5 days straight and laughed about it!!
After weighing in at
138.8, I remember going to work and telling my coworker that I needed to lose a
solid 20 pounds, but I never really thought that was possible.  I also
said I’d be ecstatic to just lose 10.
I had been reading the
encouraging posts on Wellness Witness, but never was moved enough to do
anything.  My brother, Matt, had just had his first child in December and
so I had booked my ticket to fly out to Texas February 19, 2014 to meet my
new niece!
I was excited to meet her,
but also very excited to see my brothers!  I had not seen my brother Matt
in five years the last time being before he was deployed to Iraq.  I had
not seen my other brother John in almost a year.  My brothers moved to
Texas when I was just 20 years old, the summer of 2001.

They both had always known
of me as their petite sister.  Not that they loved me because I was
petite, but that’s how they knew me and I didn’t want to see Matt for the first
time in five years being this size.

I had nothing to wear.
My legs were squeezed
into the biggest pair of jeans I’d allow myself to buy.  Then there was
also my wonderful muffin top.  I was a mess.
The summer of 2013 my
sister said she had some patients have success using Jillian Michaels 30 day
shred.  I had bought it back in July 2013, did it for four days
straight.  Then fourth of July hit, I missed a day and then I just never
did it again.
I decided to try it
again. I pulled out that DVD and did a 20-30 minute session of High Intensity
Interval Training.  My sister had also told me about the My Fitness Pal
app that would help me track calories.  So I started doing that.  I
hadn’t changed my diet that much, but I knew when I had hit my calorie intake
limit.  I also started drinking only water. I did drink water, but I
always got kids meals wherever we went and it comes with a kids drink, so I
would think to myself, “why not have the free drink?”.

That had become my
mindset.

I started taking my 36
oz water bottle everywhere I went.  Especially while driving, it’s easy to
drink a lot on the go.
Anyway…my fitness pal,
30 Day shred, water…that’s how I started.
I had lost
about 3-4 pounds by February when I went to Texas.  I was
feeling better about myself.
My next goal was to run
some of a 5K that my office participates in every year.  My sister
signed up too.
I had walked it the year before and I was
hurting for days!  I didn’t train to run the 5K, but just doing the JM DVD
helped equip me to be able to run at least half of it.  My sister helped
motivate me along the way.  I had finished the 30 day shred, in about 40
days, the night before the race.
Next I moved on to
another set of Jillian DVDs.  I believe it was Killer Buns and Thighs and
Six Week Six Pack.  I alternated doing those 5-6 times a week for
months.  Mixing in a little 30 day shred here and there. 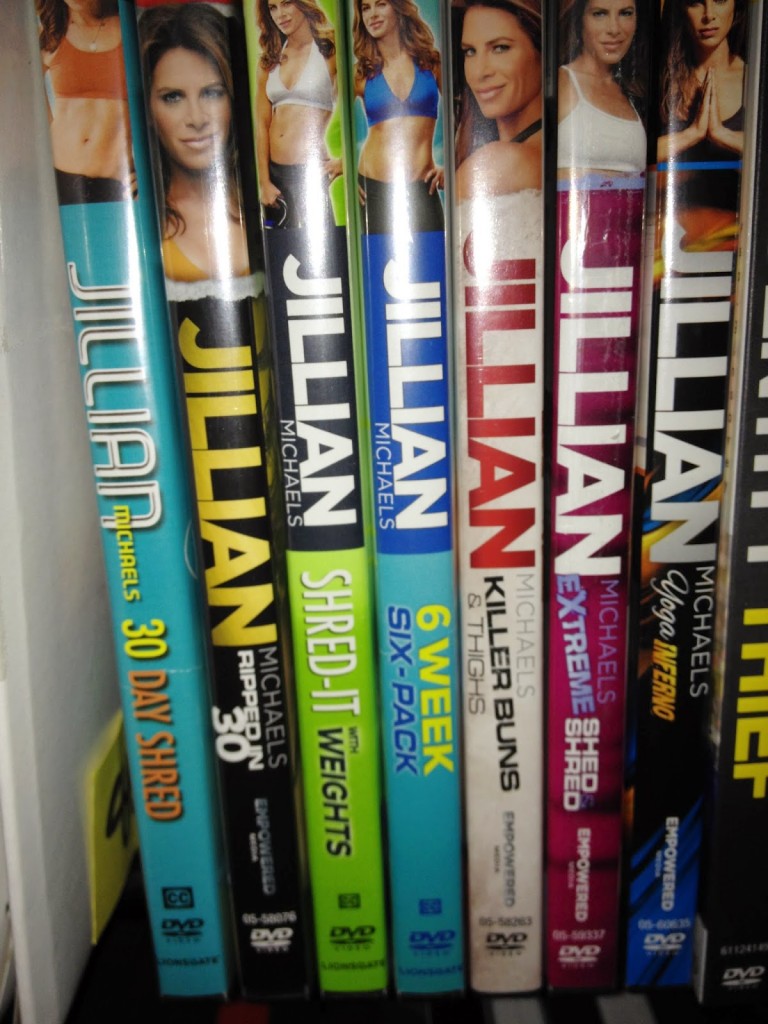 But I
believe the real change came when I took on the “clean eating”
approach and I took your advice on the metabolic carbs (find that info here).
That’s pretty much what I still do.
I try to eat a lot of protein in
the form of chicken, turkey, ground beef, nuts, lots of chobani greek
yogurt.
In general I stay away from bread and pasta.  I eat
turkey burgers without the bun, which is delicious.  I also just eat plain
deli turkey.  There is no need for the two slices of bread!!
Those
protein balls saved me in the beginning of this journey, although I haven’t
made them in months.  But I loved those!  They felt like a treat
and it nipped my hunger in the bud.
I also loved your protein pancake
recipe.  I did eat mine with maybe a tsp-Tbsp of organic maple
syrup.  I also love the Dark Chocolate and sea salt Kind bars that
only have 5grams of sugar.  I try to stick to the 15 grams of sugar or
less and lowest possible metabolic carb count as possible when it comes to
packaged food.  I read labels and look for whole ingredients.  No
added sugar or salt if I can help it.  I just learned to eat salad in
April which was a huge step for me!!!  But I also load up
on fresh spinach and kale through my morning smoothie that I make a
lot for breakfast.  I can’t remember where I got the recipe,
but it’s one of my favorites.  I’ll write it at the end.  I make
a zucchini lasagna instead of using pasta.  I just try and substitute
where I can.  I quit snacking late at night.  That was one of my
biggest downfalls. I stopped counting calories and now just try to eat
whole foods.
I also now do Jillian Michaels Ripped in Thirty
and Extreme Shed and Shred.  I just love her DVDs.  Since August
20, 2014 I have been doing Zumba once a week.  I LOVE it!!!  It’s a
workout, but I don’t feel like it’s working out.  I feel like I’m just
dancing for an hour.  I obviously feel a million times better- I have so
much more energy and feel confident!!  I still enjoy froyo with m&ms
and reese cups, usually once a week.  And I’ll have pizza
or something I wouldn’t normally eat, usually once a week.  I’d
say I eat well about 90% of the week.
By the beginning of the summer, about 3
1/2 months into my new lifestyle, I had lost probably
13-14 pounds.  I just continued my new eating and exercising
habits, also started a Kettlebell video, but don’t have a kettlebell so I use a
dumbbell.  I started taking Zumba and have just gradually lost another 7-8
lbs since the summer.
I lost a total of 22 pounds and multiple clothing sizes.
When I started I was a size 8 or 10 and now am around a 2 or 4 in pants and a 0 or 2 in dresses. 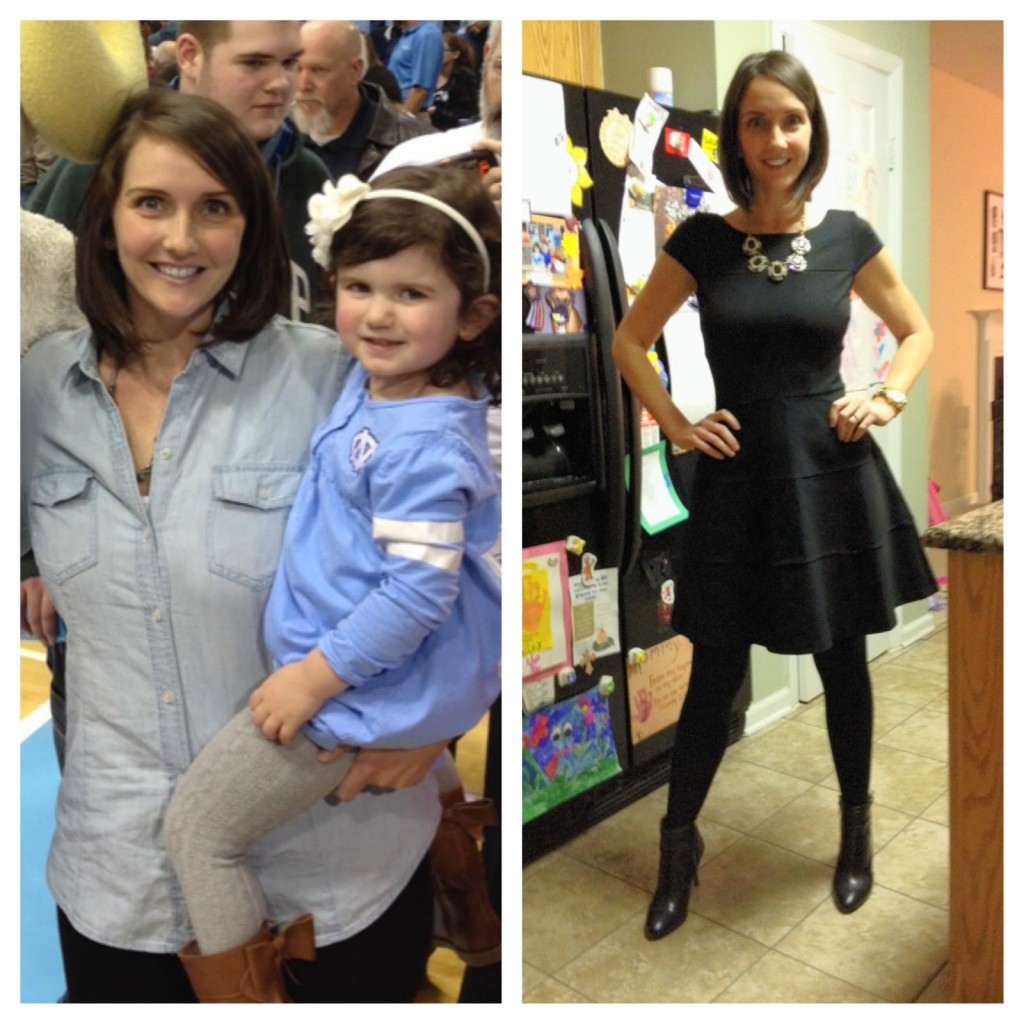 I must say that I think
I’m in the best shape of my life.  I tried on some clothes from my
“prime” and they are too big.  My body is just stronger!!
I’m SO thankful to
God for helping me along this journey.
It has not always been easy.  I have to
fight temptations every day.
But I know that my body is a temple and I am
to honor God by taking care of what He has given me!  It also
helps set a great example for my daughters.
———————————————

Isn’t she amazing?! I’m so grateful that God put this lady in my life and that she’s on a journey to live a healthier life for HIM!

And because Kat’s awesome, she agreed to share her favorite smoothie recipe with you:

1-2 cups of fresh spinach or kale
1/2 cup of vanilla Chobani greek yogurt
1/2 cup of granola*
1 Tbsp honey
heaping Tbsp of almond butter*
1/2 tsp – 1 Tbsp of black chia seeds*
dash of cinnamon
dash of pumpkin pie spice
1/4-1/2 cup of crushed ice
1 frozen banana
*I
buy my granola from Whole Foods.  Granola has a lot of sugar in it!!  I
had to search through many labels to find one that I thought was okay.
It is sugar free, and has stevia leaf extract in it.  Blackberry Hills is
the company.
*Almond
butter is also pricey.  I also buy this from Whole Foods.  In the nut
section, they have a machine where you can grind your own almond
butter and peanut butter.  I love this because you can see that the
only ingredient is almonds!  Plus my kids enjoy pushing the start/stop
buttons.  I also think it’s cheaper.
*I don’t really measure how much chia seed I put in.  But 1/2 tsp-1 Tbsp is a good guess.  You can’t mess it up either way.
Side
note…I’ve found buying the Chobani yogurt in the bigger tub is
cheapest at Target and probably Wal Mart.  Don’t really shop at Wal
Mart.  But I think I did glance one time and it was the same price as
Target.  It’s $4.99 and sometimes there is a Cartwheel coupon.  It
normally lasts me for about 4-5 smoothies.
Posted in Blog, Motivation, Success Stories