That time I lost it… 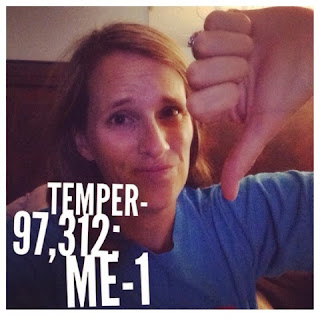 The day
started off much like any other. I didn’t have to teach my fitness class so
when my alarm went off at 5:15 a.m. I was grateful for the chance to get up and
spend some time alone with Jesus.

I tiptoed downstairs, being sure not to wake my kids, poured myself a cup of
coffee and settled in with my Bible, journal, and study aids. Today I read in
Colossians Chapter 3 which talks about the ‘old man’ that we have put off and
the ‘new man’ that we have become through Christ.

I read, underlined, and journaled about putting away all anger, malice, rage,
selfishness and then reflected on the need for putting on kindness,
humility, gentleness, patience, and love. I prayed, reflected and thought, “I
am ready for this day. I’m ready to love. I’m ready to ‘make allowance for
other’s faults’ and to allow the peace of Christ to rule in my heart today.”

I purposed to be a person of gratitude and posted on the Wellness Witness
facebook page asking people to join me in giving thanks in all things today
instead of grumbling or complaining.

And then the day began.

The pair of shoes I put on had a hole in the bottom. My kids refused to get up
and we were way behind schedule. My son wanted to argue about what he was going
to wear (as he does every single day), the kitchen was a mess, my daughter
couldn’t find her favorite boot, no one liked what we had for breakfast, and my
son completely melted down over something that (in my opinion) was ridiculous.

And before I could even realize what I was doing- I lashed out. My mouth spewed
words of anger and hurt. I stomped my feet and threw the equivalent of the same
tantrums that I get so mad at my kids for having.

Although a
tantrum at my age looks a lot different at my age than it does when you’re
four, it’s the same behavior.

Bottom line: because I don’t get what I think I deserve, I rebel.

Within a span of 15 minutes I went from a woman pressing in and asking God to
make me a person of peace and love, to being an angry, harsh mama who gave no
grace to her kids. Or to herself.

And as much
as I hate to type these words to you and wish that I could gloss over them and
pretend to you that they aren’t true, they are.
And they need to be said.

Because what happened next, most likely happens to you, too.

As soon as I realized what I had done, I felt guilt.
Shame.
Conviction, but also condemnation.

Almost audibly I could hear the voice of the accuser saying:
“and you call yourself a believer? “
“You think that you’re capable of leading others?”
“How can you ever expect to teach anyone else about who Jesus is when you so
obviously don’t know yourself?”
“You are a failure.”
“You are a hypocrite.”
“You should be ashamed of yourself.”

And in that moment, until I got my perspective back in place, I was.

This wasn’t a holy conviction of sin, this was an all-out attack from the enemy
on WHO I was and what I was capable of doing.

My immediate reaction was to think how I have NO business leading anyone else.
I wanted to erase the words that I had previously posted and I wanted to go
silent for a while. To no longer speak or write or teach or lead until I felt
“worthy” again.

I once again saw the ugliness of my heart and my desperate need for grace.

He wanted me to throw up my hands, raise the white flag, and walk away from the
calling I’ve been given in shame.

And friend, although your life, your calling, and your sin may look a whole lot
different than mine, he is trying to convince you of the same.

Sin breaks God’s heart. Sin separates us from Him.
But it doesn’t change the way He sees us.

Today when I blew it, I could approach His throne and know that I was not loved
one single bit less than I was during my tantrum and also know that I wasn’t
loved a single bit more when I was sitting and reading His Word.

My value, my worth, my relationship with Him IS NOT conditional on my
performance for Him. He just loves me.

He desires fellowship and reconciliation with me.
And HIS voice isn’t one of condemnation. The Holy Spirit can convict, but Jesus
doesn’t condemn.

Conviction is godly sorrow that leads to repentance. Condemnation is the
pointing out failures in order to tear you down and draw you further from God.

Maybe you can admit to having some less than stellar moments.

And it’s possible you would further admit that you have heard the voice
of condemnation telling you that you aren’t good enough…
that you will NEVER be redeemable…
that you can’t be of any value to the Kingdom because of the sin you carry…
that you can’t be rescued…
and that you don’t have a voice worth speaking up.

Hey friend, hear me say this: perfection isn’t a requirement for following hard
after Jesus. A willing heart is.

You may blow it.
No, You WILL blow it at some point.

When that happens, you have two choices: Allow the sin to remain, fester, grow
bigger, and to separate you further from God.
Or, run to Him and ask Him for forgiveness. To not allow condemnation to
take the place of conviction.

Refuse to allow your failure to become your identity. The only banner that should
be raised over you should say BOUGHT BY JESUS
not ‘prisoner to sin’
not ‘guilty’
and definitely not ‘lost cause’

You’ve been
given a voice, a ministry, and a message. Keep speaking. Keep writing. Keep
living in big and in small ways for Him.

God hasn’t
given up on me and He isn’t giving up on you, either.