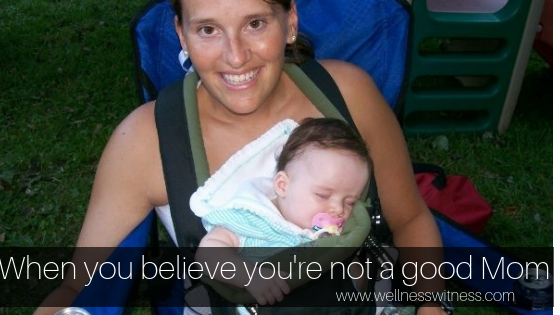 This afternoon I scrolled through the memories on my  Timehop app, and I read words I’d posted ten years ago today- They literally took my breath.

I had posted on Facebook: “I’m not sure I’m very good at this whole mom thing”.

That’s exactly what I posted.  I’m not sure what prompted it. Not sure of the reasons or motivations behind why I decided to declare it to my corner of the world, but there it is, in black and white ten years later: I’m not sure I’m a good mom.

I may have written that I wasn’t sure that I was a good mom, but the whole truth was that I had decided and determined it to be true that I was, in fact, not a good mom, and that it wouldn’t ever change.

Here’s the crazy part: I never even realized I had bought so deeply into believing this and can’t pinpoint even how it began. Although I had my own struggles with post-partum issues (story for another day), and I delivered two healthy, strong-willed babies, I don’t know how or when my role as Mom became one I believed I would never be good at.

I’d make comments with friends or in our small group such as “We aren’t having any more kids- I’m just not good at being a mom”. I’d often criticize and critique my every perceived parenting fail as if I were weighing evidence to prove my lack. In my mind, the judge had determined his verdict: Kara: not a good Mom- period, end of story.

Just typing those words makes me tear up.

A couple years ago I had a friend reach out to me and in firm, kind words she called me out on it. She told me that it wasn’t true, she pointed me back to Scripture, and she told me to STOP IT.

After I recovered from the shock of reading her words , I realized that she was totally right and that I had bought hook, line, and sinker into the lie that I wasn’t good at this important calling. More than that, I’d decided I never would be.

Why am I sharing this with you?

Because whether you’ll admit it or not, there is someone out there who will read this tonight and get it.

You’ve bought into the lie that because parenting doesn’t look like you thought it would, that the reason is because you aren’t a good Mom.

Or maybe it’s another reason such as:
-your kid won’t behave
-you send them to public school when others around you don’t agree
-you homeschool when others around you don’t agree
-you chose to bottle feed them formula and not exclusively breastfeed
-you lose your temper and sometimes scream so loud that you scare yourself
-your kid loses his/her temper and screams so loud that they scare others
-your kids are constantly in trouble at school
-your child has strayed far from you and their faith
-you put your kids on a normal vaccination schedule
-you put your kids on a delayed vaccination schedule
-your house is a total wreck
-your forgot to pick up a kid from soccer practice
-you don’t love every moment of being at home with a screaming baby
-you miss the days when you didn’t have to worry about anyone else
-you are often short-tempered and count the minutes until bedtime

NONE of these things (or about a million more that I could list) make you a bad mom.

Here is what counts, friend: You show up.

You show up and you do what you can.

I didn’t come up with this phrase but I’ve sure clung to it and declared it over my own weary heart: BAD MOMENTS DON’T MAKE BAD MAMAS.

You don’t get it all right, that’s true, but you keep trying.

You give them what you’ve got and you pick yourself up when you don’t know how you can.

You may not do it like all the experts tell you to, but sister, hear me: If you’re still showing up and still trying, YOU ARE DOING IT RIGHT.

Your kids don’t need a perfect mom, they just need you. Out of every single woman in all of creation that has ever lived from the beginning of time, God picked YOU to be their mama.

You’re EXACTLY the right woman for the job.
You’ll mess it up and you’ll want to give up, but you won’t.
You’ll keep going and you’ll try again because love means showing up, and going low, and being willing to do the hard work we sometimes most don’t want to do.

You’ve got this, Mama.

I’m cheering you on big.