Why You Can’t Quit 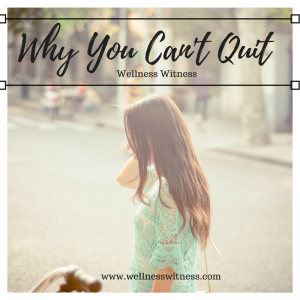 Do you ever go through those seasons or times when it seems like everything would just be better if you quit?
Maybe it’s a diet or a healthy eating plan, a budget, a new business venture, or even an attempt at fixing broken relationships. Possibly it’s  trying to speak life into dead places, or to find your voice in a new calling, or to stop losing your temper with your kids.

Whatever that THING is that you’ve been called to, sometimes it just feels hard. Heavy. Too much.

I’ve been in those seasons, too.

For me, it’s usually because I’ve picked up something that wasn’t mine to carry,  I’ve made it about ME instead of about Him, or because I’ve forgotten that He who calls is FAITHFUL.

Sometimes it’s just because change is never easy…breaking old strongholds, going a different direction, learning new responses…it takes WORK. It takes resolve. It takes JESUS! We forget, so we try to buckle down and plow our way through it on our own. We strive and strain and operate from our own places of brokenness.

At some point, we inevitably will make a mistake to want to throw in the towel all together.
It’s possible that in those times, the enemy comes after your heart and convinces you that you don’t have what it takes- that you’re never going to find break-through, so it’d be easier to just quit trying.

Because right around the corner?

Right on the other side of opposition? BREAKTHROUGH.

I grew up listening to Ricky Skaggs bluegrass music (yes, totally not kidding), and one of my favorite songs had the line, “The Darkest Hour is Just Before Dawn”.

For many of us, we just never make it to seeing the sunrise because we turn back at the last hour.
We stop after six laps when after the seventh, the walls would have fallen.
We wander in the desert like the Israelites begging of the comforts of our captivity when He is trying to lead us into the Promised Land.

I don’t want to quit on the things the Lord has called me to.

And, deep down, I know you don’t either.

You were made for HARD THINGS and to press in when things get difficult…you were made for MORE than shrinking back and playing small. So what do we do when we’re faced with such discouragement, such opposition, and such difficulties?

STAY CONNECTED TO HIM.

We’ve got to stop judging our ‘success’ by comparison to the people around us, by the amount in our bank accounts, the number on our scales, or the amount of likes we have on social media.
We’ve got the learn the hard, holy, and humble lessons of persevering even when we can’t see progress.

We have to stop looking for an emotional high and to just be obedient to what we’ve been called to do.

Even in the hard.
Even in the lonely.
Even when it looks like what we are doing matters to no one else.

Whether your battle and calling is washing dishes and taking care of your babies at home, or leading a Fortune 500 company with integrity and excellence, it matters.

You can’t quit because ALL OF IT MATTERS.

No calling too small.
No gifting wasted.

Keep going.
We need you.